As backhaul seeks to increase capacity with the expected data explosion that is happening, full duplex seems to offer a useful increase in capacity. 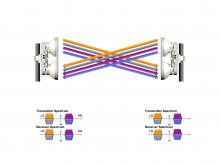 As backhaul seeks to increase capacity with the expected data explosion that is happening, full duplex seems to offer a useful increase in capacity.

Wireless traffic continues to increase exponentially, and backhaul is now struggling to keep up with the required capacity. This is already a problem for 4G operators, but with the explosion in traffic expected when 5G begins to be deployed, the magnitude of this problem will only get worse.

Evolutionary developments in modulation technology - using higher orders of quadrature amplitude modulation (QAM), data compression engines, and similar - have yielded only incremental increases in overall throughput capacity, so it is clear that a more radical step forward in wireless transport technology is required.

Recent advances in full duplex radio technology research and development could provide the answer, so it is worth us looking in more detail at this technology and the benefits this technique can bring. Deploying full duplex radio provides an immediate doubling of capacity and spectral efficiency compared with conventional frequency division duplex links, and this has recently been demonstrated for the first time in a live mobile network in Italy.

Radio frequency spectrum is a highly regulated and often costly resource, both in the access layer (the handset to base station connectivity) of mobile telecommunications networks and the transport or backhaul layer, which typically provides the connectivity between the base station and the core network. The regulatory framework has historically mandated relatively narrow frequency channel allocations, which have typically been restricted to 28 MHz and lower channelization - and multiples thereof - in the microwave frequency bands between 7 GHz and 42 GHz. Up until now this has effectively limited the usable throughput of the channels in these frequency bands.

Full duplex radio is an innovative technology that can relieve this bottleneck. By using the same frequency spectrum allocation to provide both the forward and reverse directions of communication simultaneously, it immediately gives both improved spectral efficiency and enhanced throughput capacity. Traditional radio methods require the use of either frequency division duplexing (FDD) or time division duplexing (TDD) to achieve bi-directional communication. With traditional FDD techniques, twice the spectrum is required compared with that for full duplex radio to achieve the same throughput. With TDD, the channel is time-multiplexed between send and receive transmissions, limiting the overall throughput to half that for full duplex radio.

The realization of full duplex radio has been made possible with recent advances in digital signal processing techniques and improvements in RF and microwave device fabrication and performance. While much research and development in full duplex radio has been focused on solutions for the access layer, MIMOtech has taken a different approach by developing a solution to double the capacity of traditional microwave backhaul. Its Air Division Duplexing (ADD) technique applies a combination of spatial multiplexing, microwave engineering and digital signal processing to achieve a full duplex radio implementation in the frequency bands between 15 GHz and 42 GHz, for high capacity wireless backhaul transport.

MIMOtech has implemented the ADD technique in its latest Janus AirDuplexTM Radio, to achieve a net doubling of throughput capacity when compared to traditional microwave FDD solutions. With this approach, mobile operators are now able to backhaul with transport capacities of up 1 Gigabit per second in a 28 MHz RF channel allocation. The technology is scalable, giving multi-gigabit throughput solutions in channel bandwidths of 56 MHz and above in the traditional microwave bands, as well as in the larger channel bandwidths available in the millimetre-wave frequency bands, allowing true fibre-like capacities up to 10 Gigabit per second to be transported over wireless backhaul links.

A major advantage of ADD to mobile network operators and telcos is that it extends the usable life of the extensive microwave spectrum investments that they already hold in the bands between 15 GHz and 42 GHz. These operators now have the option to replace legacy equipment with higher capacity microwave radios instead of migrating the backhaul network to millimetre-wave spectrum in the quest for higher transport capacities.

Shortage of backhaul capacity is a huge problem that needs a game-changing solution. Full duplex radio will be a key component of this solution, and that it will play a crucial role in the transport networks of the future.

Janus AirDuplex addresses the challenge of an escalating need for Carrier Ethernet data throughput against the limited microwave spectrum available to operators. It is suitable for small cell, microcell and macrocell mobile deployments for a range of technologies including LTE/LTE-A and potentially 5G, providing a cost-effective alternative to fibre and millimetre-wave links for enterprise and government applications.

"Capacity scalability has been identified as one of the most important technical challenges in microwave backhaul," said Buks Fouche, CEO of MIMOtech. "Data traffic continues to double in size each year, driven by the growth in data-hungry applications such as HD video streaming. Consequently the wireless industry is facing a crisis in its ability to keep up with the demand for backhaul capacity, and Janus AirDuplex provides a way to achieve higher throughput without resorting to using the millimetre-wave frequency bands above 42 GHz, offer broader bandwidths but suffer atmospheric attenuation and also often attract higher licensing fees."

Currently available microwave systems can typically only achieve up to 500 Mb/s in a 28 MHz channel allocation. Air Division Duplexing however is an entirely new technology that uses spatial multiplexing to double the capacity and spectral efficiency compared to current solutions. With an antenna separation of typically only 100mm, it can be considered as a quasi single-aperture antenna from the point of view of licensing, site rental cost and implementation. Both CAPEX and OPEX are reduced due to lower spectrum fees, lower site/tower rental fees and lower maintenance costs, while software definability offers downstream savings in upgrade costs. 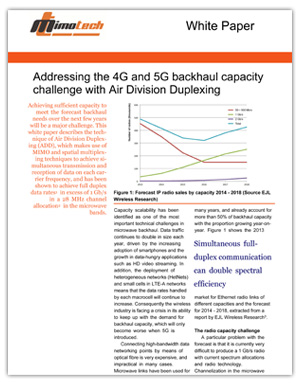 "LTE/LTE-A operators today are facing a major challenge to install adequate backhaul capacity as they roll out networks, in order to respond to increasing data traffic and growing subscriber numbers," said Geoff Carey, Marketing Director of MIMOtech. "This collaboration with CSG Hefei will allow us to jointly address all the different technology options for last-mile backhaul, and to provide operators with a solution that precisely meets their needs."

"MIMOtech's technology is highly innovative, and ideally complements our own range of lastmile backhaul equipment," said Yang Jianhui, Chief Technical Officer of CSG Hefei. "This partnership will allow us to provide network operators with a complete range of backhaul options to maximize capacity and keep CAPEX and OPEX to a minimum."

MIMOtech and CSG Hefei will both exhibit on Stand H07 in Hall 7 at the Mobile World Congress in Barcelona, 24 - 27 February 2014.

MIMOtech Launches Ultra High Capacity Radio for Last Mile LTE Backhaul Breakthrough multi-antenna technology enables 4x improvement in capacity, 2x spectrum efficiency and 50% form factor reduction CAPE TOWN, South Africa & LAS VEGAS--(BUSINESS WIRE)--May 10, 2013--
MIMOtech, a specialist in high capacity point-to-point radios, has announced the launch of Starburst Janus, an ultra high capacity packet radio for last mile backhaul. Starburst Janus utilizes an innovative multi-antenna technology yielding a spectral efficiency of 25b/s per Hz. Backhaul capacity is one of the major challenges facing LTE/LTE-A operators today as they roll out networks and respond to increasing data traffic and growing subscriber numbers. Starburst Janus' ultra high capacity enables data rates of several Gb/s to be achieved on a single frequency channel, providing four times the capacity and more than double the link performance achieved by competing products in a form factor that is reduced by 50%. Starburst Janus employs line-of-sight (LoS) 4x4 MIMO and parallel radio processing, allowing a 100% improvement in spectral usage and significantly improving operators' total cost of ownership (TCO). "Starburst Janus offers double the performance of traditional non-line of sight MIMO - measured in either capacity or distance - coupled with a significantly lower cost per bit transported," said Geoff Carey, Director at MIMOtech. "Starburst Janus also needs a significantly smaller antenna spacing than other LoS MIMO products on the market, which is a massive advantage for tower or rooftop applications where mounting space comes at a premium." Janus employs a novel, patented configuration of LoS MIMO that has a substantially smaller form factor than any other radio currently employing this technology. It uses two cross-polarised antennas spaced 1.5m apart, resulting in a mechanical configuration occupying a space that is comparable to that of a LTE sector antenna. Furthermore it uses a range of advanced microwave technologies that help operators to satisfy the growing demand for capacity - co-channel dual polarization (CCDP) with XPIC technology (utilizing the different polarizations of a frequency channel); higher order modulation schemes up to 1024QAM; high efficiency radio MAC (medium access control); asymmetrical bandwidth delivery; and Layer 1 link aggregation (Multi-Carrier Adaptive Bandwidth Control). All of these techniques have been used to improve spectral efficiency and thus boost microwave capacity; however LoS MIMO offers a further 100% improvement in spectral efficiency over and above these techniques alone. Starburst Janus will be demonstrated for the first time on Booth 3863 at CTIA 2013, which takes place on May 21 -- 23 at the Sands Expo and Convention Center, Las Vegas. More about LoS MIMO Line-of-Sight (LoS) MIMO (Multiple Input Multiple Output) is a new technology in microwave communications. Inspired by, but inherently different from the well-known non-line-of-sight (NLoS) MIMO technology that is widely used in access networks, LoS MIMO revolutionizes microwave communication in terms of capacity and spectral efficiency. Microwave radios operating in LoS MIMO provide a range of benefits including:

"Software Defined Radio" or SDR is a much-used term in recent times. The acronym means that much of the wireless transceiver hardware should be implemented using digital signal processing with its associated software core. The ideal example could be a touch-screen, smart mobile phone, let's call it a vanilla phone, which could be software programmed to be used on any network in the world, at any frequency, using any mobile standard - whether GSM / CDMA / 3G / LTE / 4G or some as yet to be defined wireless standard.

Beyond this is the whole realm of Cognitive Radio - where the wireless device or node has a wireless savvy or intelligence. The node selects the best mode of operation, the preferred band to use and channel, the wireless transmitter and receiver parameters for optimum transmission and so on.

But what does SDR mean to you?

A highly skilled and experienced team in MIMOtech, our sister technology company, is currently working on innovative software definable radio techniques to augment the present StarGate and StarLink product offering to bring new Metro Ethernet wireless products to the market in 2012.

Internet Service Providers, Network Operators (enterprise, mobile and fixed) and Telcos all have a common objective - to provide network services to their client base within predefined performance criteria at better than specified quality levels. To achieve this, a coordinated network management system is required.

However, when it really counts, at time of network or element failure, the Element Management system does not provide a direct view to locate and diagnose the fault immediately, only implied views of the elements can be used to deduce the failure. For rapid fault-finding, a complete network view is required - making visible the total network along with the graphical representation of element performance through graphic icons. Network Management provides the operator with remote manageability of the network - in a top-down approach from network level to element level.

Network Management Systems need to fully cover all the aspects of the FCAPS definition to provide the client with the cost of ownership benefits associated with these systems. At BST, we are adding SNMP v3 to the StarLink and StarGate product ranges in order to provide our clients with this management option. The feature is applicable to all Mk-II versions. Look out for the release notification.